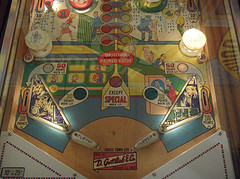 Last year my friend Bruce shared an analogy for life with me: he likened life to a pinball machine.  I have had some exposure to pinball machines.  In Junior High my friend Shawn had a Star Trek pinball, and in high school my aunt and uncle had a pinball machine in their game room that I would play at cousin slumber parties.

With a pinball machine, you pull back a lever, release it, and then it sends the pinball flying to the other end of the machine, and then gravity compels it to come back down.  But, through paddles controlled from the outside of the machine, that ball can be hit, whacked, and launched back and forth, side to side, and up and down at varying angles.  Backwards and forwards you might say.   In his description of this analogy, Bruce explained that there are times where he has seen himself seemingly progressing forward, only to then find himself unexpectedly whacked and launched in a completely different direction.  Whenever it seemed that things were going smoothly, he was paddled again and ended up in new and unfamiliar territory.  He said that during those times, it felt as though he was often disrupted from a steady progression.  But, in retrospect, he can see where he was being guided in a forward direction continually.

It is often fun for me to look back and ask myself, “Ten years ago, where did I think I would be ten years from now?” or “Five years ago, what did I think that my life would be like in five years?”  Consistently, what I would have imagined or hoped for myself professionally, geographically, or related to relationship status was not realized.  I was always sent some other way.  But I can consistently look back and see ways that my life has been divinely guided, and I can recognize that I have been moving forward, that I am growing, developing, learning and that I have been able to make a difference in the lives of others.  I have been moving forward, even though forward has taken me in unanticipated directions.

So if you feel smacked, disoriented, derailed or otherwise seemingly knocked off course, have hope.  These experiences are still propelling you forward, and they will make you a stronger person if you let them.